Controller Area Network (CAN) is a communication protocol which developed by BOSCH company which has been standardized globally in 1993 to ISO-11898. One of the feature of CAN system is with high flexibility in maintenance. It can be installed easily to workstation without any adjustment on hardware or software. Besides, it has the adjustable priority of data transmission. There is no delay to the higher priority message, and the lower priority message is automatically retransmitting after the end of the dominant message.

When the device is transmitting signals through CAN bus network, there is a suitable transmit rate for different devices. Take automotive device as an example, if the rate is below 1 Mbps, it's using a twisted pair CAN bus as transmission network. If the rate is over 1 Mbps, the communication network is using fiber optic.

As shown in Figure 2, the device can be divided into 2 categories in general: low or high speed. The transmission rate below 10 kbps are mostly body system, such as power seats, lighting system, door locks, power windows, and so on. For status information system such as air conditioning systems, dashboard, driving information display devices, fault diagnosis systems…etc., the data rate is between 10 kbps and 125 kbps. 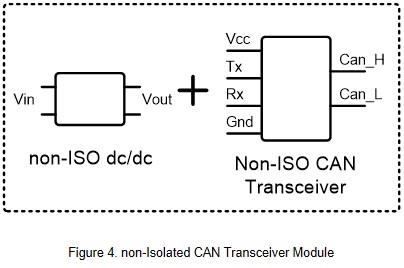 Based on the safety requirements and the purpose of preventing packet loss during transmission, isolated CAN transceivers are commonly used in communication system. There are three types of application methods. The first method is using optical couplers for galvanic isolation, along with non-isolated CAN transceivers to transmit the signals. An additional isolated power supply is needed, as shown in Figure 5(a).

The advantage of this method is that the optical coupling is cheaper and with high selectivity. However, the speed of signal transmission is limited by optical coupling, and the overall power loss and layout space is larger.

Another method is to use an isolated CAN transceiver with an isolated power, as shown in Figure 5(b). The signal transmission of this method is not restricted by the optical coupling. It is with faster transmission speed and the power loss is low.

Using isolated transceiver is a popular application for communication system. However, the disadvantage is it needs more layout space for an isolated power supply.

The latest application method is a CAN transceiver with built-in isolated power supply, as shown in Figure 5(c). Not only with faster transmission and lower power consumption, it also helps to smaller the product as there is no space needed for an additional isolated power supply.

Figure 6 shows an application circuit using the optically coupled and non-isolated transceiver. The MCU transmits and receives signals through optical coupling. And the isolated signals are transmitted to the communication network through the transceiver. The overall part count and layout space are large, and the signal transmission speed is limited by optical coupler.

Now the latest application is shown in Figure 7. It can transfer signals between communication network and MCU through a single module, without complicated parts. 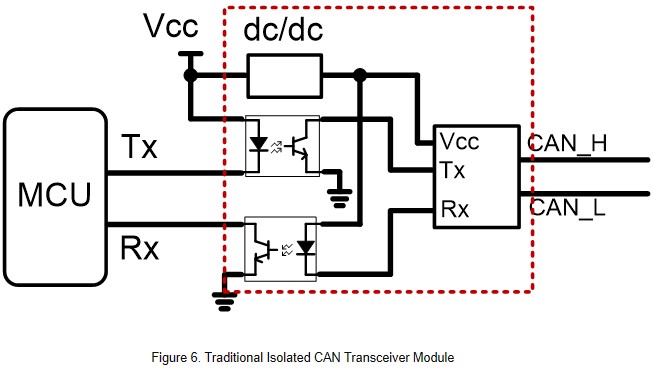 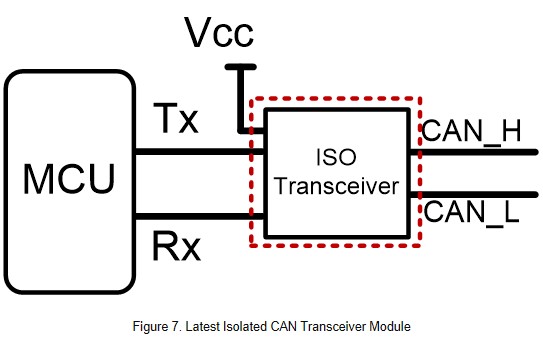 CAN was originally used as a vehicle communication interface in the automotive industry. With the development of communication networks, many industries have begun to implement CAN. For example, industrial application, railway or renewable energy, as shown in Figure 8. The microcontroller transmits the differential control signal by CAN transceiver, so the signal can be transmitted to a designated application in a great distance. 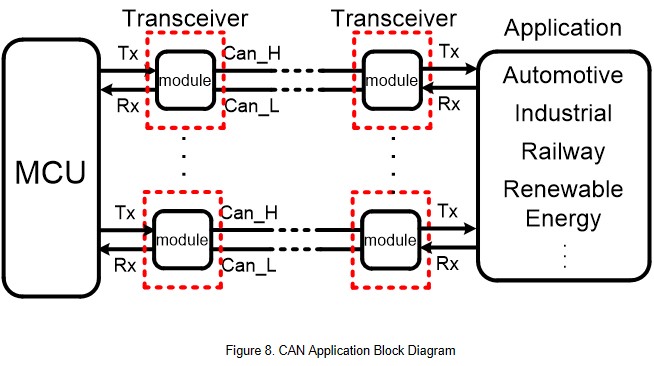 The high transmission speed and high reliability of the CAN bus replaces the complex traditional automotive electronic network. Figure 9 is the block diagram of CAN bus which is used in the automotive electronic system. As shown in the figure, the control unit can communicate with each other via the CAN bus, such as controlling the engine, gearbox or door lock through MCU or ECU, or display battery information on the dashboard. 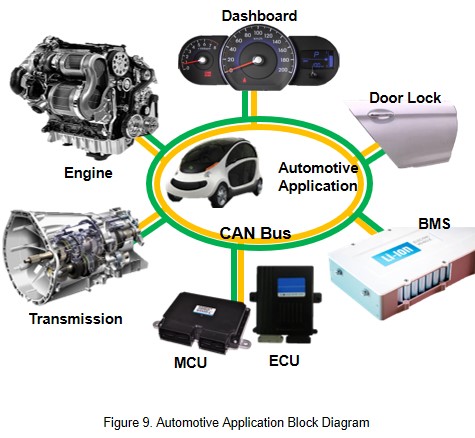 There are also many industrial applications using the CAN transceiver such as industrial communication system in smart factories. As shown in Figure 10, the human machine interface (HMI) transmits control signals through the CAN transceiver to control end devices or instrumentation, such as robotic arms, gates or motor. At the same time, it can also receive temperature or humidity information collected by sensor, or video image by camera. 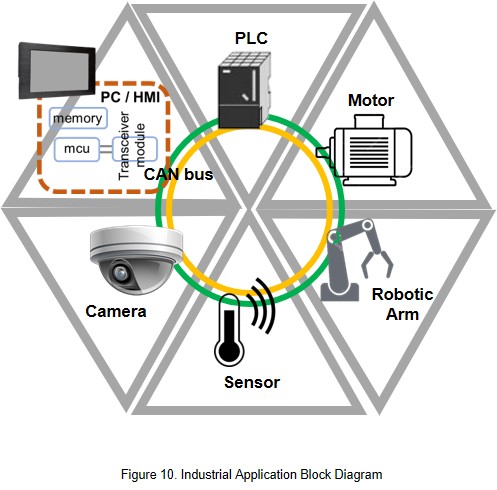 Except for the automotive application, CAN bus is often used to transmit and receive information in railway applications and new energy applications. Figure 11 is a schematic diagram of the railway application. It can be seen from the figure that the train's propulsion system and the door switch system are transmitting signals through CAN bus, as well as the temperature and humidity measurement system inside the train cabin, and shows the BMS status to human-machine interface system. 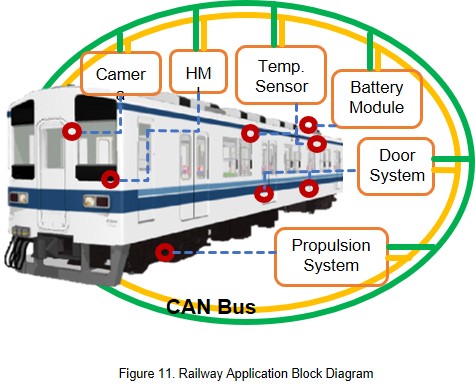 Figure 12 is the block diagram of renewable energy application. The controller transmits the command signal to the motor through the CAN network to control the direction of the solar panel. With the right angle, the solar panel can provide maximum power point. In addition, the status of the battery module can also be known from the CAN network. 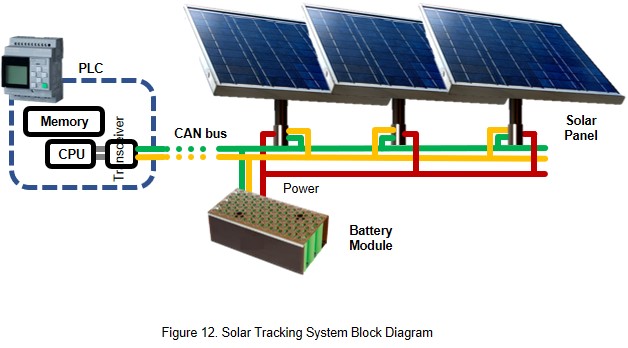