Home
>
News
>
Technology
>
How do you parallel two DC/DC converters?
Back to top

How do you parallel two DC/DC converters?

Industrial manufacturing is gradually toward the automation industry, and smart factories have become a global trend. Equipment such as robotic arms and industrial servers required for automated production and digitization have high power requirement. In addition, in terms of railway applications, train control systems and computers, etc., all require a power supply of more than 150W. Science and technology develop rapidly, in addition to the basic requirements of safety and reliability, the selection of power supplies must meet the high-power output conditions. In order to increase the power of the converter, besides the circuit design that include upgraded the components and functions of the power converter, it is also possible to use two power converters in parallel. It doesn't need to redesign new products, and directly obtain greater power, which is a way to save design time and cost. The advantage is that each module bears smaller current and the selection of components is more flexible. In case one of the power supplies fails, the other one can be backup power and maintained the output voltage. It can be maintained and replaced for increasing the overall reliability of the power systems. 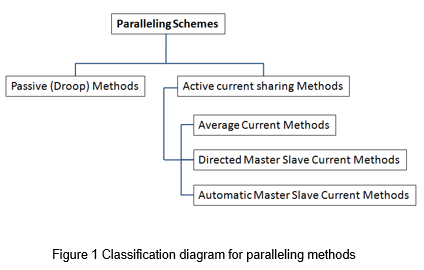 Since each power module has a tolerance, if they are directly connected in parallel without taking measures that evenly distribute the current for the power modules, It will cause the output load unbalanced, as shown in Figure 2. The power converter with higher output current will bear greater stress, and long-term used will reduce the life of the power module. Or the current limit is trigged by one power module, and then the protection makes the output function invalid.

The voltage droop method can achieve current sharing in the simple way, and each power module is independent, without additional control circuit. However, power modules with larger currents will consume more power because the resistors result in lower output efficiency, and it is difficult to perform current sharing between power converters of different powers. This is the biggest disadvantage of the voltage droop method. 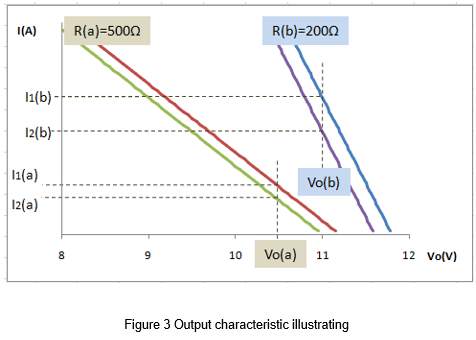 All converters provide the signals of their output currents, and this signal is used to be the reference signal of each module. For example, a power converter with a lower output current will compare the signal from the current sharing bus and increase the output voltage so that its output current is made approximately equal to the average the output current. The advantage is that there are fewer signal lines and strong anti-noise ability. However, when certain problems are encountered, the entire system cannot operate. For example, when a converter runs into a current limit, the output voltage will be adjusted to 0V. So the current signal of sharing bus will decrease, other power modules will continuously reduce their output current, causing the whole current sharing system to lose its function.

There are many active current sharing ICs on the market that can be used as external controllers. Generally, each power module needs to be connected with an external controller, and then each controller receives and processes the current signal from all power modules. The controller provides a signal to each power module and adjusts accordingly control signals to correct the imbalance of output current. Although this method can achieve higher current sharing accuracy, it usually has more complicated circuit design and relatively high cost.

When two power converters are connected in parallel, the output voltages of the two power converters will not be exactly the same due to component tolerance and trace, etc. Therefore, a power supply with the higher output voltage may cause the countercurrent to other power converters, and the damage might be occurred. An ORing diode is placed in output path of converter, so that the current of each power module can only flow to the load end. Another advantage is that it can support the implementation of ‘N+1’ redundant design. The N+1 architecture adds at least one additional power module. When one of the power converters is failed, the diode can protect the other power modules from being affected and maintain the output function of the system. 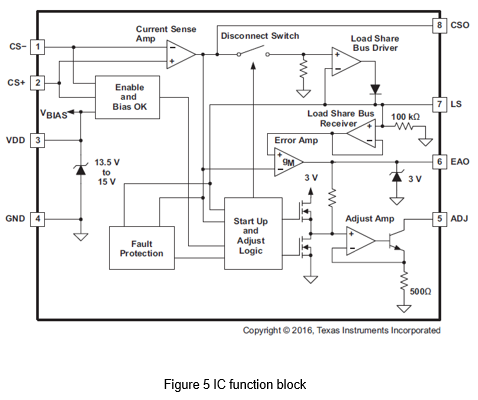 Load share bus driver receives the signal from the current sense amplifier. When this signal is the highest among all power modules, it will generate a forward bias to the diode and become the master power supply. For other power supplies, the VCSO and VLS signals are separated due to the reverse bias of the diode. That allows the error amplifier to compare its respective module’s output current to the master module’s output current and make the necessary corrections to achieve a balanced current distribution.

Load share bus receiver can monitor the load share bus voltage, and then send the signal of the main power supply to the error amplifier.

The two ends of the error amplifier come from the current signal of the master module and own current sense amplifier, and compares two signals. If the current signal of the master power is higher than the module's own output current, an error signal will be generated in the compensation component between EAO and GND. The error signal is used by the adjust amplifier to make the necessary output voltage adjustments to ensure equal output currents among the parallel operated power supplies. In case the UCC39002 assumes the master load share controller in the system, the measured current signal on VCSO and VLS is approximately equal. 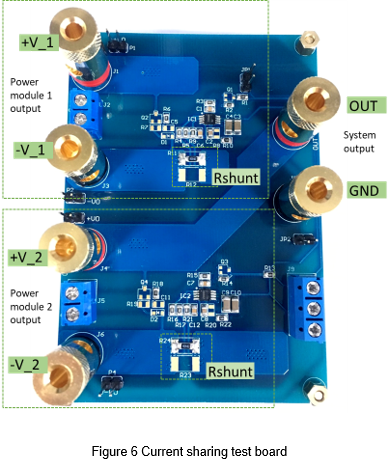 The following table shows the specifications of the DC/DC power converter for this experiment.

The external components required by the IC should be determined according to the specifications of power module. The following is the design description of each parameter

Choose 40mΩ as the detection resistance, and confirm that VRSENSE is much less than ΔVADJ.

The gain of the current sense amplifier is adjusted by the external components of CS- and CSO and, to avoid saturating the internal amplifier, VCSO（max） is limited to:

The maximum gain of the current sense amplifier is

The maximum gain of the current sense amplifier is selected as 30, and it is set by RCAS1 and RCSA2

In order to filter out the noise, the capacitance value of the CCSA can be calculated by the following formula

CCSA is equal to the actual capacitor value selected for this pole, 100pF.

The selection of resistance must keep the internal transistor from saturating, so the voltage on the ADJ pin must be greater than or equal to the error amplifier output voltage, VEAO, by at least 1 V.

Also needed for consideration is the maximum sink current for the ADJ pin, which is 6 mA as determined by the internal 500-Ω emitter resistor and 3-V clamp. Assuming that the maximum voltage drop of RADJ is not greater than the maximum output voltage adjustment range of the power module.

In order to meet the above two conditions, 100Ω is chosen as the adjustment resistor. 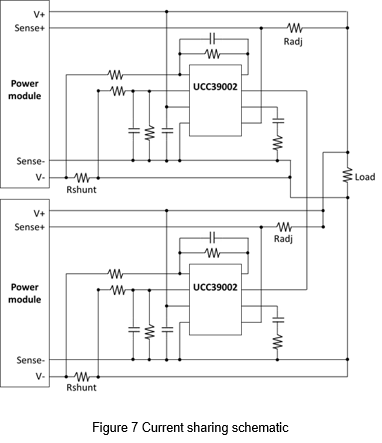 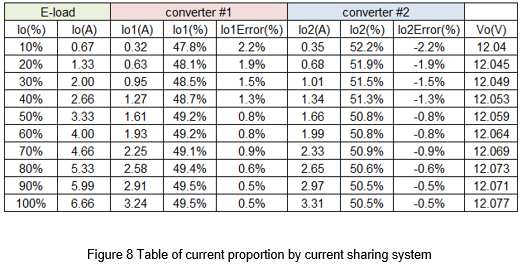 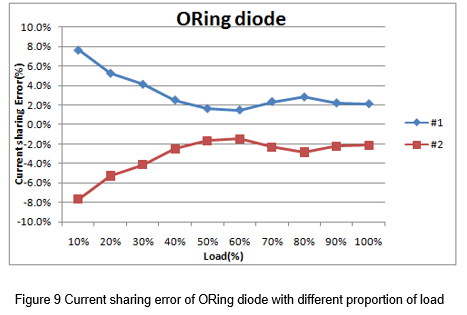 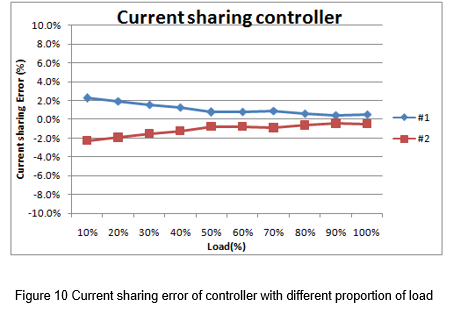 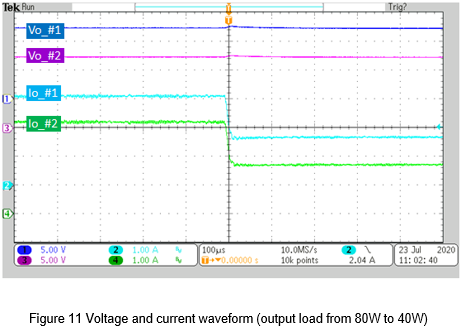 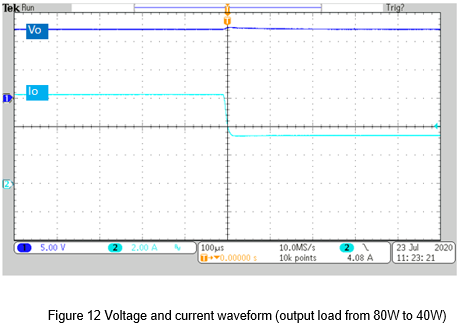 To achieve better accuracy of the current sharing system, it recommended completing the following items

This article uses the existing DC power converter to design an external current sharing circuit to perform a parallel connection and increase the overall output power. The actual experimental results can confirm the feasibility of a parallel connection. When the output load is higher than 50% of the full load, the current sharing error is less than 1%. When the output is a full load, the current sharing error can be reduced to 0.5%. And the overall output voltage and current can still remain stable under dynamic load conditions. Therefore, the feasibility of this parallel system can be confirmed.