Home
>
News
>
Technology
>
How to evaluate the heat dissipation of a power converter ?
Back to top

How to evaluate the heat dissipation of a power converter ?

Efficiency is an important specification for evaluating power converters. It is defined as the percentage of output power divided by input power. When the input power is not equal to the output power, the difference is the lost energy. Power converters and electronic components will occur energy loss, most of which will turn into useless heat. Therefore, it is necessary to carefully deal with the problem of heat transfer to avoid damage to surrounding electronic components caused by high temperatures. Figure 1 shows the relationship between the converter's efficiency and the load, and Figure 2 shows the relationship between the converter's power loss and the load. These graphs show that a converter with more losses has lower efficiency. 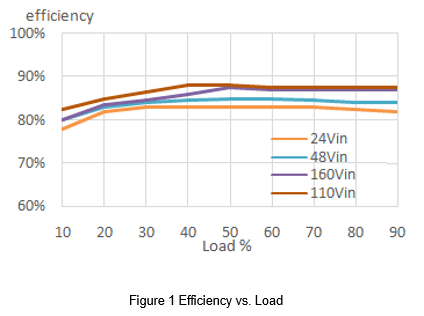 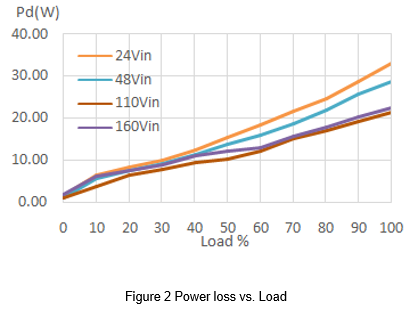 There are three ways of transferring heat energy: conduction, convection and radiation.

Conduction is the process by which heat energy is transmitted through collisions between neighboring atoms or molecules. Molecules in high-temperature objects have higher energy and the heat transfers from high temperature to low temperature. If the object is in contact with another with different temperatures, molecules will collision to produce energy transfer. The heat conduction capability is that solids are greater than fluids, and metal has the best heat conduction performance. Assuming that the heat transfer direction is the x-direction, Fourier's law simplifies as follows:

The heat transfer rate is proportional to the conductivity of the material, the cross-sectional area of the heat flow direction, and the temperature difference, and inversely proportional to the distance of heat transfer. Choosing a heat sink has to consider the material and thermal resistance, and let the contact area as large as possible. The closeness between the heat sink and the converter will also affect the effect of conduction. The uneven surface will cause a gap between the heat sink and the converter, and the air in the gap will greatly reduce the efficacy of thermal conduction. Therefore, thermal conductive glue or thermal pad can make the contact surface completely close to achieving the maximum effect.

The heat convection coefficient represents the effect of heat transfer. Factors affecting the heat convection coefficient include the temperature difference between the fluid and the solid, the velocity and direction of the fluid, and the shape and surface, and so on. The use of a fan can greatly reduce the thermal resistance from the surface of the converter to the air. However, it is necessary to pay attention to the direction of the radiating fins to allow the wind to circulate, and regularly replace the filter to avoid dust or foreign objects causing system failure.

Power converters or general electronic components need to evaluate for thermal effects. When the temperature is over the limit, the converter needs to be derated to avoid component damage. In this case, an appropriate thermal solution can be added, such as a heat sink or cooling fan. The benefit of the heat dissipation can be evaluated by the thermal resistance, but only considering the state of thermal equilibrium and not evaluating the non-linear temperature rise. Simple calculations can be used to understand the temperature change and select an appropriate heat sink.

According to (1) and (2), the following equations can be obtained. The thermal resistance of the material can be calculated by the thermal conductivity of the material, the cross-sectional area of the heat flow direction and the distance of heat transfer. 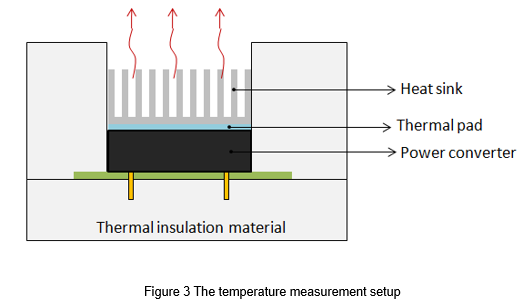 The equivalent thermal circuit shows in Figure 4. The total is the sum of thermal resistance on the heat dissipation path. The converter case to air resistance can calculate by the known power loss, and case temperature and the ambient temperature are measured. 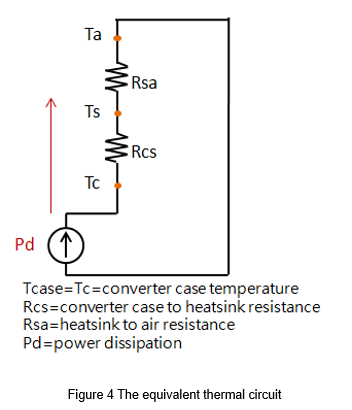 It should be noted that the calculation results of the above methods contain margins. Especially the measurement of the ambient temperature, Ta, is very difficult. There is no unified measurement method currently. The distance between the measuring point and the converter will cause a great difference in the temperature. And in a forced convection environment, there is no conclusion on where Ta should be measured. Therefore, the accuracy depends on the measurement method and how many calculation conditions. 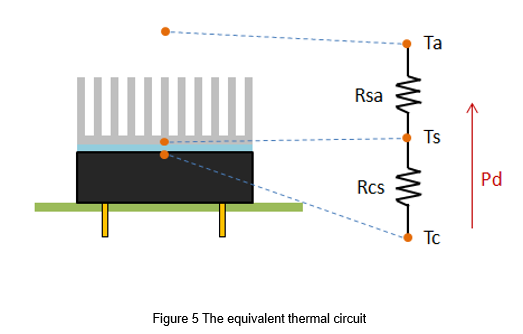 The specifications of the heat sink and thermal pad are defined as follows:

The equivalent thermal circuit is shown in Figure 5, first calculate the thermal resistance of the thermal pad by formula (4).

The total is the sum of thermal resistance on the heat dissipation path.

Then calculate the maximum ambient temperature by formula (6)

The cooling fan gives forced convection. It must note that the filter should be replaced regularly to prevent dust from entering the chassis, which may reduce the cooling efficiency or cause the system to shut down. Placing heat sink should consider the relative position of wind direction and fins, and make the most efficiency to take away the heat. 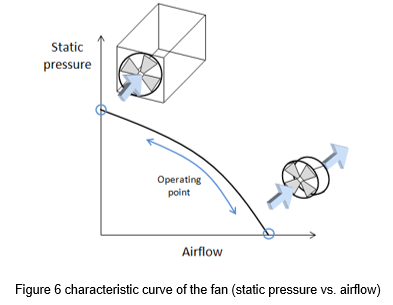 The power loss of a power converter is 17W, and the maximum temperature is limited to 110°C. The specifications of the heat sink are as shown in Figure 7. How much the airflow needs to give to the system if the ambient temperature rises to 80°C? 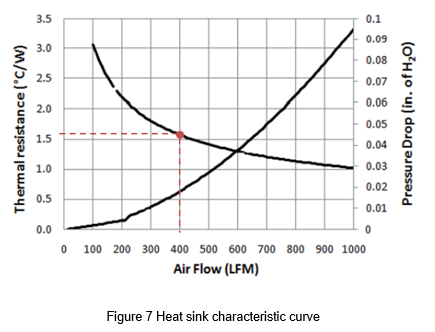 Calculate the thermal resistance from the heat sink to the air from the known temperature and power loss: