Home
>
News
>
Technology
>
How to enhance the operating temperature of converter?
Back to top

How to enhance the operating temperature of converter?

For high-power applications, the accumulation of excessive heat in electronic products will lead to performance reduction during operation. Therefore, the requirement for operating temperature range of power converter will be increased. In order to further understand the effect of operating temperature, it is necessary to know the source of heat energy in the power converter firstly, and then evaluate the benefits of various heat dissipation methods and calculate the total thermal resistance.

According to the heat balance rule, when the input power is not equal to the output power, the difference between the two is overall power loss which is dissipated as heat. Excessive heat energy will raise the ambient temperature of the system and even damage nearby components.

When the load current of power converter increases gradually, the load power is also proportional to the heat loss power according to the influence of the conversion efficiency, as shown in figure 1. The load percentage as the horizontal axis and the power loss as the vertical axis. 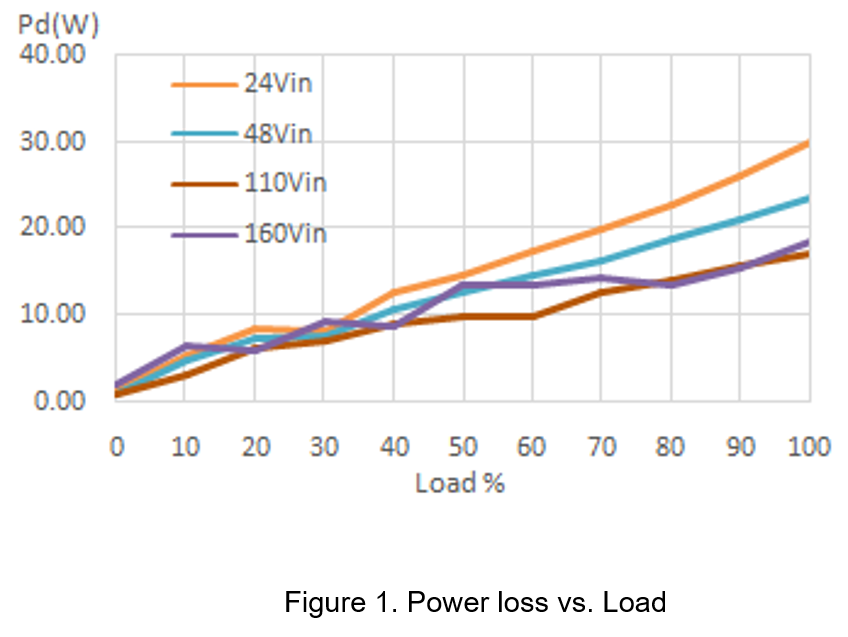 The traditional way of heat transfer is mainly through conduction, convection and radiation.

Conduction is the process by that heat energy is transmitted through collisions between neighboring atoms or molecules. Due to the high density of the solid, the thermal conductivity is also quite high, so the heat transfer speed becomes faster. For example, the heat transfer speed of metal material is faster than that of glass and plastic.

The power converter with high power consumption not only uses an aluminum substrate package but also adds a metal heat sink which will increase the heat dissipation area, so the air flow will quickly take away the heat energy as shown in figure 2, the red line is the contact area between the power converter and environment.

By the cold air falling and the hot air rising, the airflow flow through circulation, and then the temperature of the two tends to be uniform. The large temperature difference between the hot and cold air, will increase airflow speed and improve the convection effect.

Installing fan near the high-temperature components is used to increase the airflow speed, and then reduces the thermal resistance from the surface of the power converter to the air as shown in figure 3.

When the power converter is under heavy load, the high-temperature components located in the middle of the PCB continue to heat more, and then affect the surrounding temperature.

In addition, each component temperature on the PCB will be significantly reduced after placing the fan above the high-temperature component. 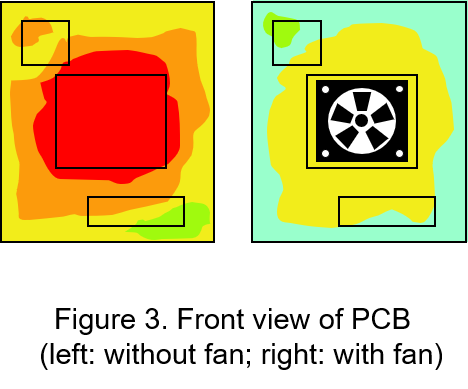 Thermal radiation is the main method of long-distance heat transfer. It does not need to pass through the material as a medium, and is directly transmitted from the heat source to the surroundings until it encounters another material for absorption or reflection.

To use heat-dissipating coatings can greatly improve the radiation efficiency. The heat-dissipating coating is a material that is applied to the surface to improve the heat radiation effect on the surface of the material to dissipate heat. This method uses the principle of high reflection to reduce the heat energy to absorb electromagnetic radiation, and reflects most of the heat energy back into the atmosphere.

In the process of power transfer, the heat energy consumed by the power converter is converted as heat. If the system works in an environment with a large temperature difference for a long time, the material of the components will be damaged due to different thermal stress. Therefore, the power converter must work in a relatively stable temperature range to reduce the rapid temperature change to eliminate the thermal stress shock, and the period of use can be extended. To increase the operating temperature can be through circuit design, PCB layout design, external device configuration and so on.

: impedance of the drain and source of the power MOSFET.

In order to avoid improper operation of the user or distortion of system equipment, inrush current or output voltage surge, resulting in an abnormal increase in the operating temperature of the power converter, overvoltage protection and short circuit protection circuits are used to prevent problems from occurring.

Most PCB backplanes use copper-clad/epoxy glass cloth substrates or phenolic resin glass cloth substrates. This material has poor heat dissipation effect, so only a small amount of heat energy is dissipated from the surface of the component to the surrounding.
Consider proper component configuration and circuit layout to enhance the heat dissipation effect. By increasing the circuit width of high temperature components and reducing the circuit length, noise interference and equivalent impedance can be reduced.

To select external accessories, actually install, and use a cooling fan to give forced convection. It must be noted that the filter should be replaced regularly to prevent dust from entering the chassis, which may reduce cooling efficiency or cause the system to shut down. Another way is to transmit the heat energy of the power converter from the surface of the aluminum substrate in an evenly distributed manner through the heat dissipation fins. The best place to place the heat sink is on the aluminum substrate, and the tightness between the heat sink and the power converter will also affect the conduction effect and voids, and the air in the voids will greatly reduce the thermal conductivity. Therefore, thermal adhesive or thermal pad can be used to make the contact surface completely close to achieve the maximum effect. 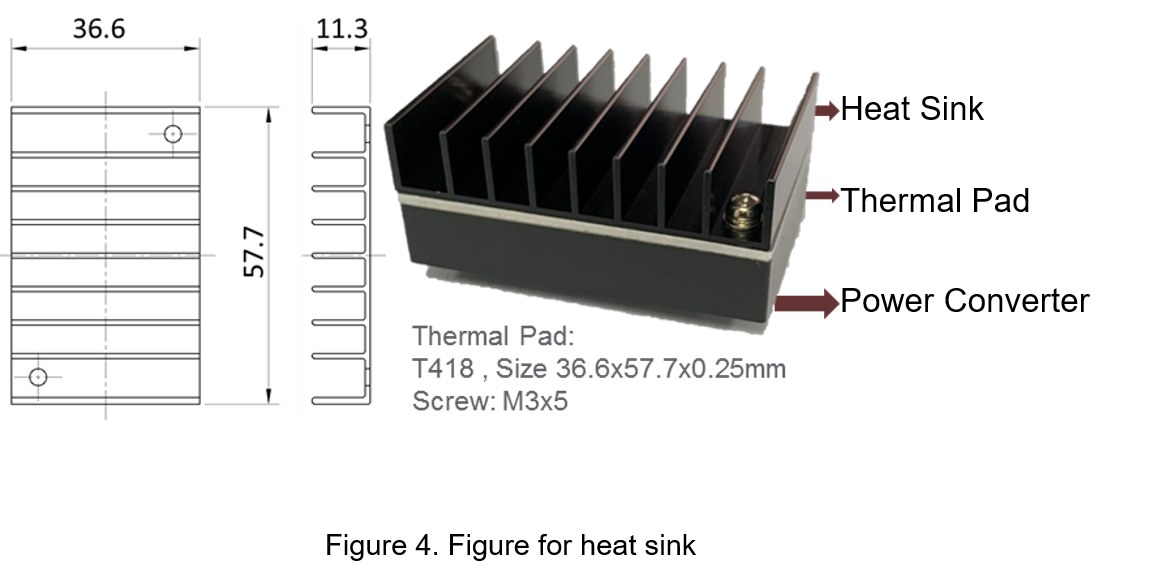 The specifications of the heat sink and thermal pad are defined as follows:

The equivalent thermal circuit is shown in Figure 5, firstly, calculate the thermal resistance of the thermal pad:

The total is the sum of thermal resistance on the heat dissipation path.

Then calculate the maximum ambient temperature is

From formula (3), it is known that the lower the total thermal resistance is, the higher the system's operable ambient temperature will be. Among them, RHA is affected by the material and structure of the heat dissipation fins, which are made of aluminum alloys and characterized by low price, light weight, and good thermal conductivity. RPH refers to the contact resistance between the heat dissipation fins and the power converter, while adding The insulating and thermally conductive patch with a large thermal conductivity is connected to the top, the RPH will be significantly reduced; RJC is the thermal resistance caused by the temperature difference between the internal highest temperature element and the surface of the power converter, and can be selected by selecting a better thermal resistance. Thermally capable potting material and reducing air bubbles in the potting material to reduce thermal resistance. 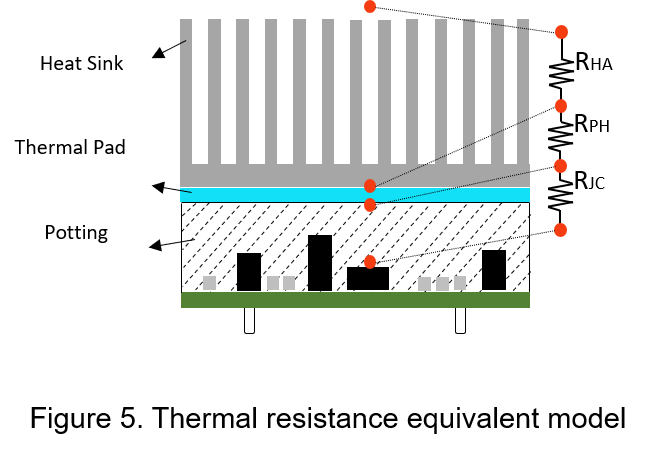 The function of the glue filling operation for electronic assembly is to (1) strengthen the resistance to external vibration (2) improve the electrical insulation and waterproofness of the internal components (3) uniformly disperse thermal energy.

Enhancing the operating temperature of power converters is one of the future trends. In order to ensure that power converters operate at safe temperatures, it is necessary to understand various heat dissipation methods and precautions, from circuit design to component selection, depending on the specifications of different applications. Through the concept of thermal resistance, the complex thermal performance can be evaluated by a simple calculation method to evaluate the heat dissipation scheme of the converter, and finally the purpose of increasing the operating temperature will be achieved.