This article describes what meaning of transient response, introduces how to occur and what factors to affect, and observes the effects by measuring the output voltage waveform in a DC-DC converter.

1 What is Transient Response

The transient response refers to the process of changing the output voltage from the initial state to the steady state when the output load changes, that is, the amount of change in the output voltage that has not yet reached the steady state, for example, the variation of output voltage VOUT and the inductor current IL during the charging and discharging of the capacitor of the buck converter. The small signal model for output equivalent capacitor contains the equivalent series resistance (ESR) and the equivalent series inductance (ESL), and both of which cause the change of the output transient state, as shown in Figure 1. 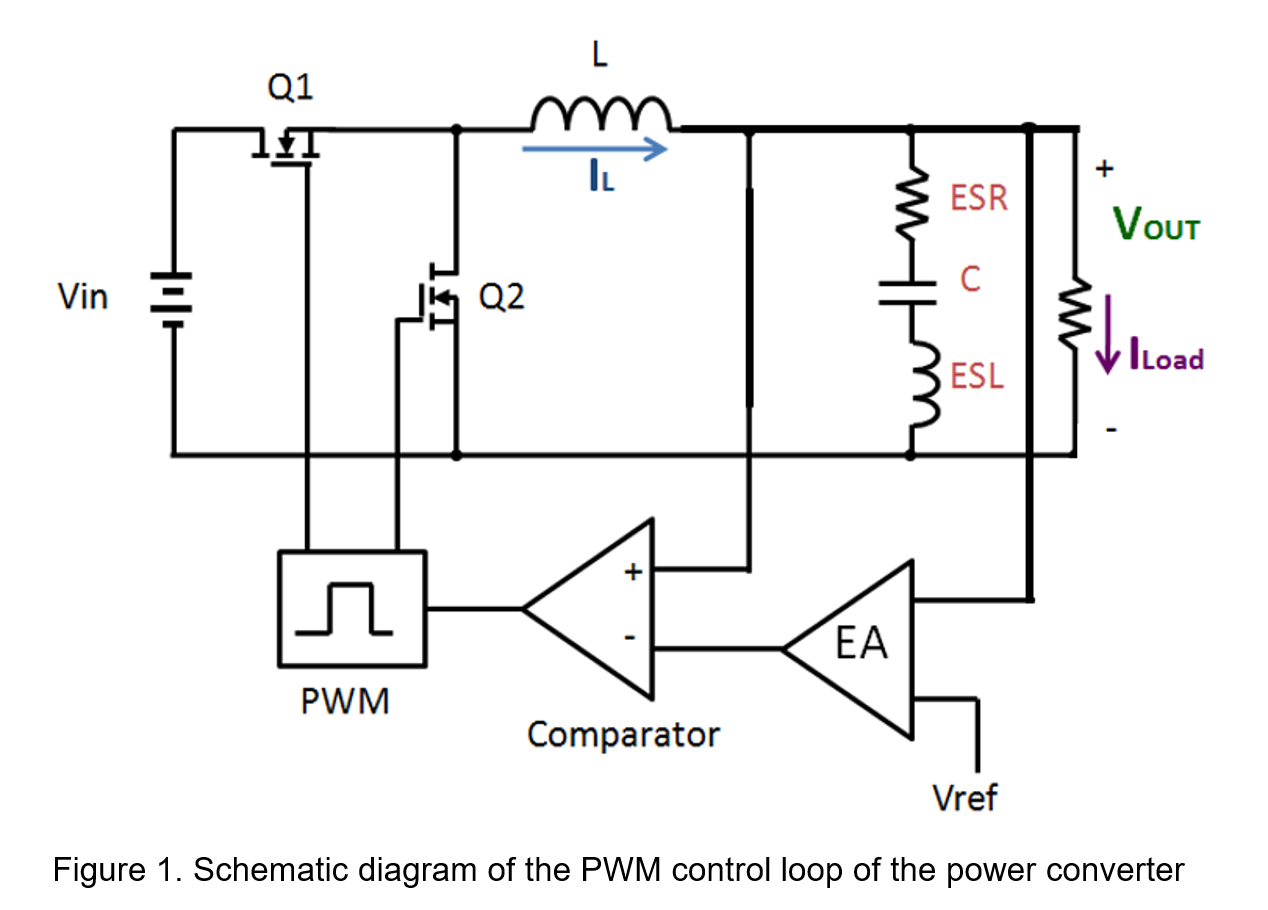 When the load current transiently becomes large, the ESR and ESL of the output capacitor reduce the voltage on both sides of the output capacitor because the converter cannot provide enough current immediately. The ESR causes the output voltage drop and the ESL causes the oscillation surge. According to the inductor characteristics, the surge generated by ESL is related to the time of load change, if the load change time is faster, the voltage surge generated by ESL is larger, as shown in Figure 2. 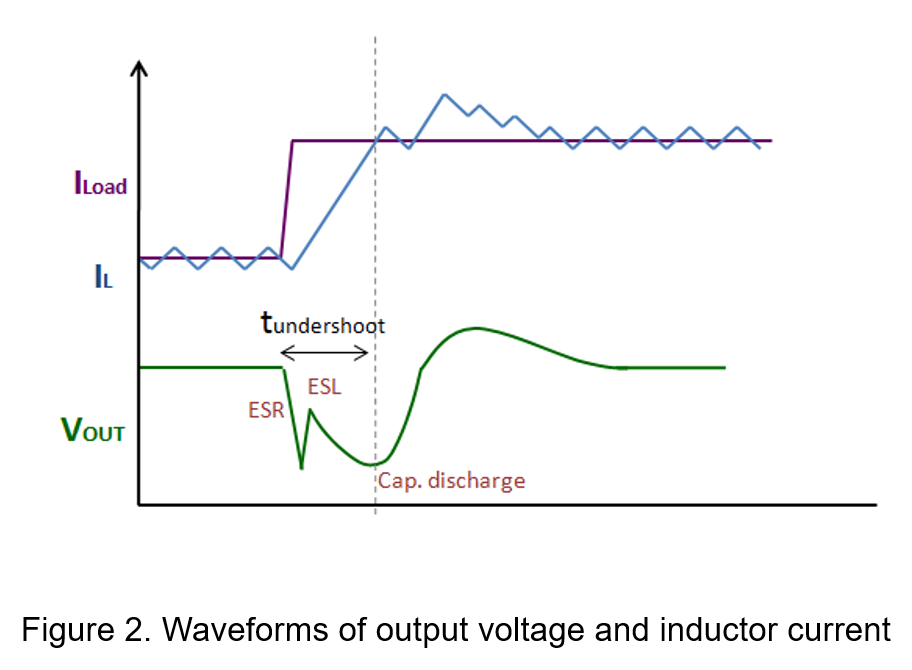 Figure 3 shows a typical transient response waveform. When the load current goes from 75% to 100% and back to 75% of the measurement condition, when the load increases instantaneously, the voltage will drop suddenly and then slowly return to the set value. 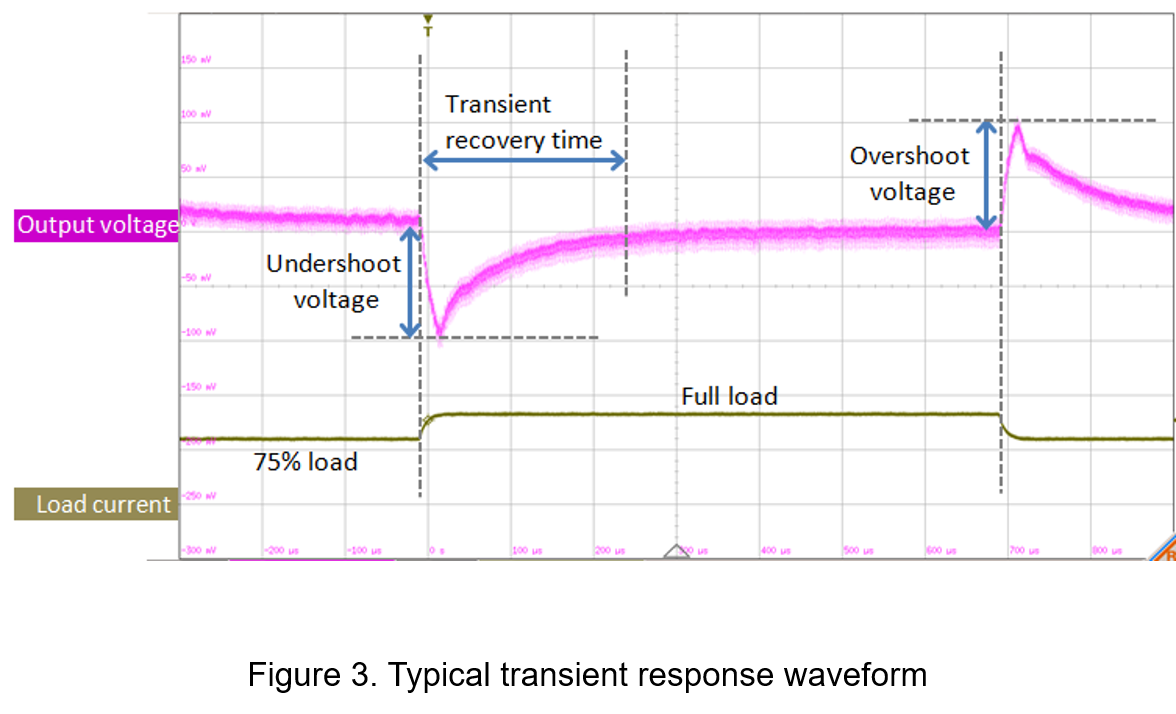 There are many factors that affect the transient response, such as the bandwidth and slope compensation of the internal control loop, the PCB layout and the components used, and so on. However, these characteristics cannot be changed by the user of the product, and can only be changed at the output end by adding a capacitor. It should also be noted that when using large capacitors, the ESR of the capacitor equivalent resistance becomes lower, which changes the zero frequency of the original power converter control loop and affects the bandwidth and phase margins, but increases the undamped oscillation of the output voltage and even the continuous oscillation of the output voltage, which eventually extend the transient response time.

When using the electronic load to control the output load variation from 50% to 100%, it can observe the transient time and the output voltage change waveform by the output capacitance is adjusted. Figure 5 shows the measured waveform of the 44uF capacitor, and the transient voltage drop is 73mV. 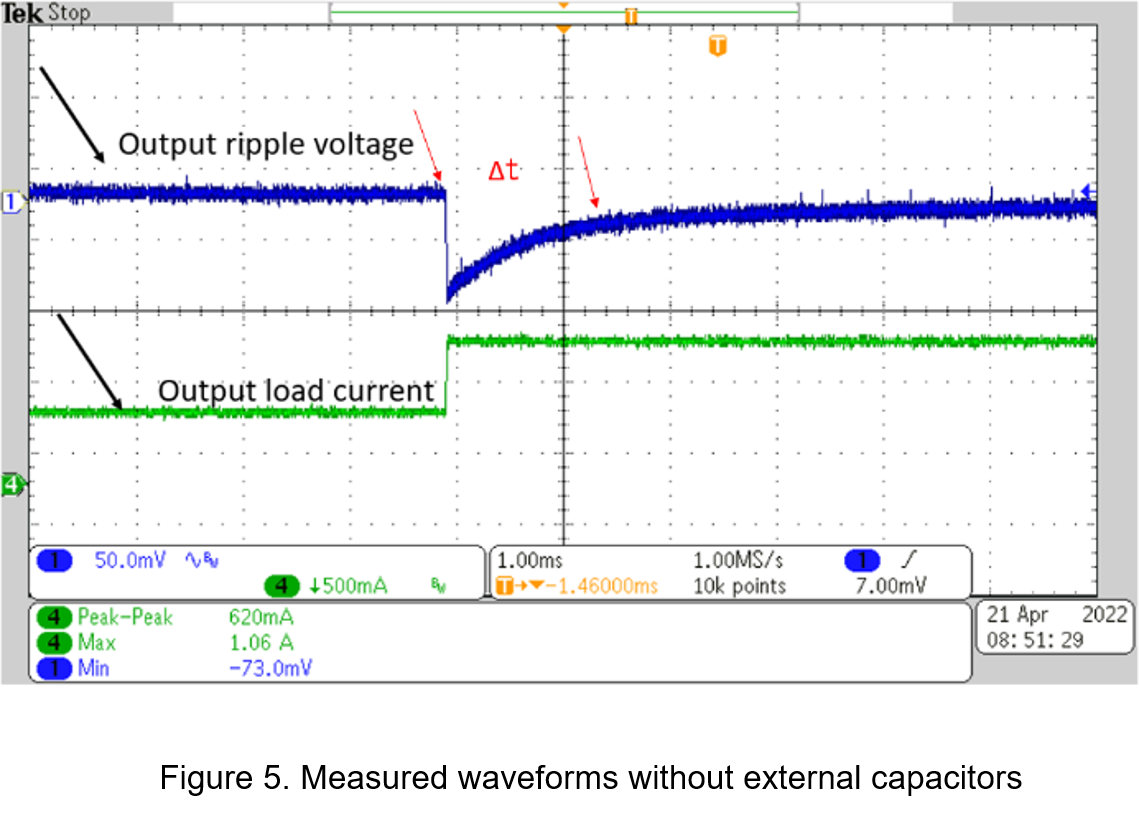 Figure 6 shows the measured waveform of the output capacitor 514uF with a transient voltage drop of 59mV. 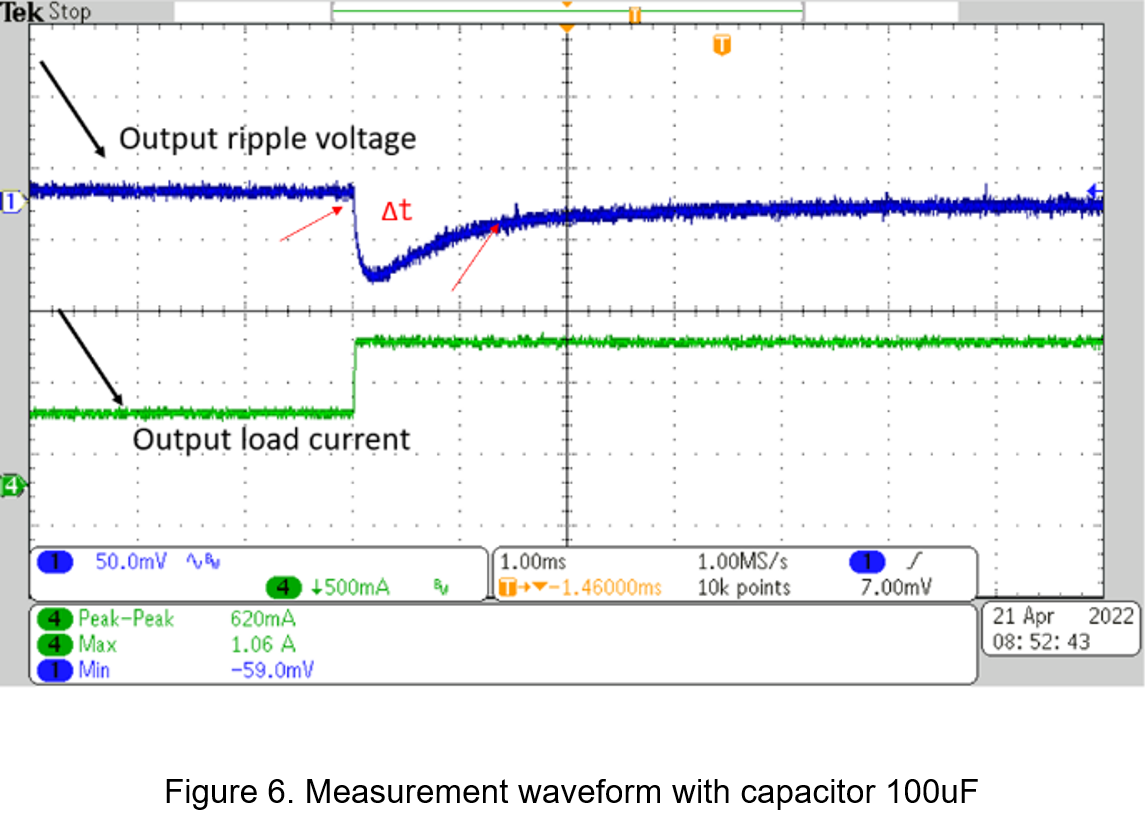 Figure 7 shows the measurement waveform of the capacitor 6494uF, and its transient voltage drop is 39mV. 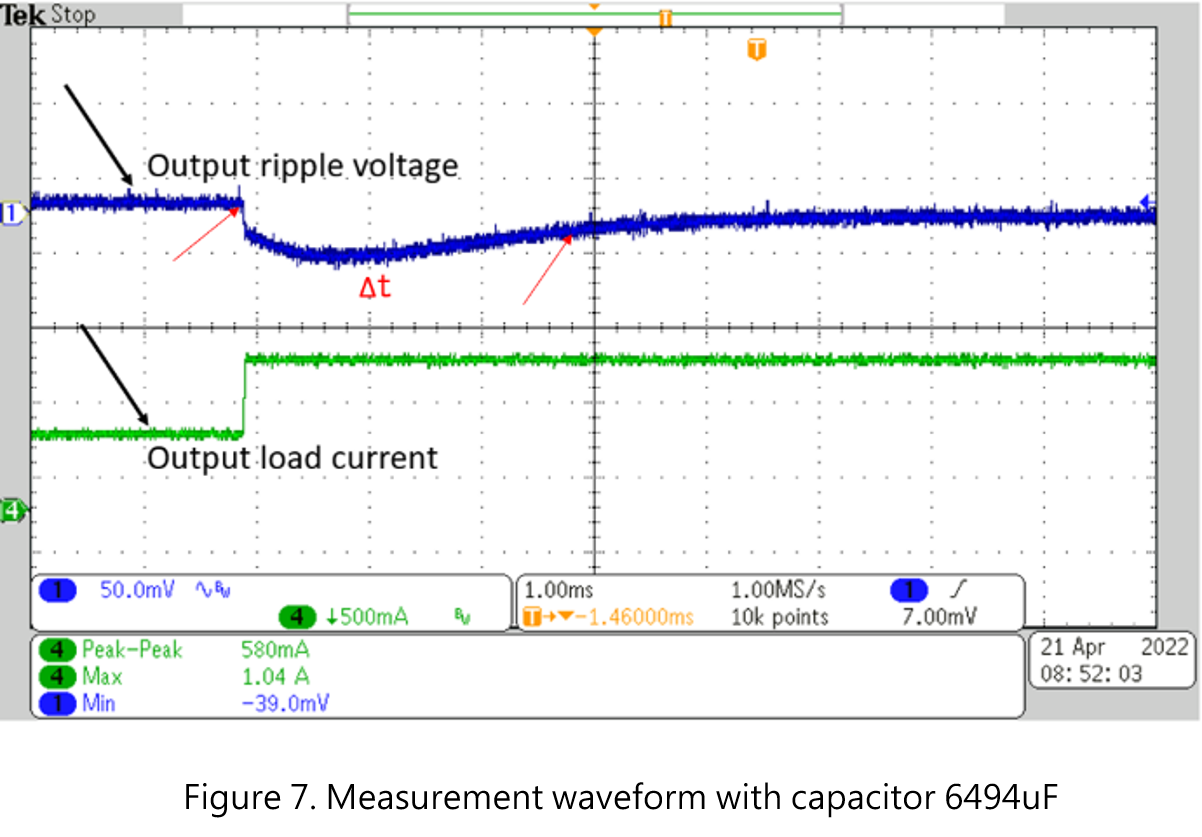 Δt in the above figure is the Recovery time

In the new industrial application field, AIOT and IIoT control units need to process a variety of information in time, which leads to the expansion of load application switching loads, so they tend to respond to the needs of faster and larger switching load power; on the other hand, the high output voltage Stability is still the direction that needs to be considered in system security design. Through the transient response test, observe the voltage transient under the output load change to observe the output stability of the power converter, and find the most appropriate improvement method from the factors affecting the transient response, so as to obtain more stable and efficient better power supply.