The effect of sulfurization process on component

Pollution levels increased not only affecting human health but also causing reliability problems for electronic components. Electronic products are exposed to the air for a long time, especially in high pollution environments, such as volcanic areas, sewage treatment areas, industrial zone, etc. Consequently, the components could early damage due to sulfur corrosion occurrence, which affects reliability and life. Therefore, the development of the anti-sulfur process is necessary, and effective verification is also required to ensure that sulfur corrosion is avoided during the life cycle. The sulfur corrosion verification on passive components may become one of the industry standards in the future, and it remains to be seen that it further becomes a market trend.

The basic structure of a surface mount resistor shows in figure 1, which includes a substrate, a resistor layer, a protective layer, an electrode layer, and a plated layer. The electrode layer is a material containing silver (Ag). 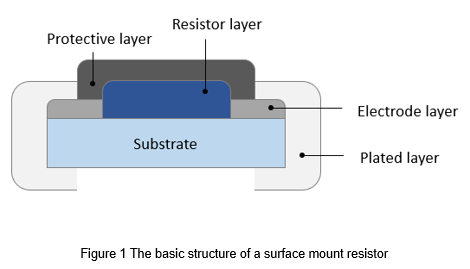 The chemical reaction will take place between sulfide and silver to produce silver sulfide, a non-conductor when the SMT resistors are exposed to a polluted environment and contacted with hydrogen sulfide and sulfur dioxide gas in the long term. Hydrogen sulfide will diffuse between the protective layer and the electrode layer. A chemical reaction begins and gradually transforms into silver sulfide. This reaction causes the resistance value to increase and even creating an open circuit. Ultimately the device failed to operate normally. 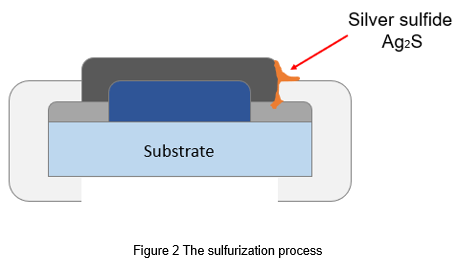 To prevent the occurrence of sulfurization, manufacturers have developed anti-sulfur technologies for components. There are generally two methods. The first is to use a layer of sulfur-resistant material to cover the electrode layer and avoid contacting the hydrogen sulfide. This method is more common and can effectively prevent sulfurization. Another way is to use a different material for the electrode to replace traditional materials, which has effective results but has a high cost.

Most of the industry adopts the ASTM B809-95 specification, which defines the Flowers of Sulfur (FOS) test method to confirm the porosity in metallic coatings, that is, to confirm the integrity of the metal coating on the product surface and protection capabilities. The standard procedure is to place the sample at 50°C and expose it to sulfur vapor for at least 24 hours to verify the reliability during operation in a polluted environment.

The Electronic Components Industry Association (ECIA) issued ANSI/EIA-977 in February 2017. This standard is revised with reference to ASTM B809, which defines options for testing electronic components for susceptibility to the effects of environmental sulfur. Such susceptibility results in the Silver corrodes in an environment containing liquid or gaseous sulfur compounds and has a potential risk of component failure. The standard specifies two test conditions. A is the ambient temperature of 60°C and exposure to a container containing sulfur for 480 hours. B is an ambient temperature of 105°C and exposure for 750 hours. The ANSI/EIA-977 standard requires a higher ambient temperature and longer test time, which represents a forceful way to stimulate the sulfurization reaction and effectively verify the resistance to sulfurization corrosion.

As the environmental pollution caused by industrial development becomes more and more serious, the application range of anti-sulfur products has become more extensive. For this reason, international organizations have published verification methods and standards in response to trends, so that anti-sulfur components can meet strict industry standards and maintain stability and durability.