Proper layout and parts placement are very important for converter, because it will help to give full play to the capabilities of the converter. Improper layout may increase output voltage ripple, or higher EMI noise, or insufficient heat dissipation of the converter, resulting in abnormal temperature rise. The above-mentioned problems can be solved by appropriate layout method. This paper provides several layout methods for reference as below.

Figure 1 shows the current path of the converter in red line. The purpose of adding input and output capacitors (Cin, Co) are reduce the input current and output voltage ripple. Below has some note for layout.

If the layout path has long distance between converter and load point as Figure 2(c) shows. It is recommended to connect capacitors at both ends to reduce the output voltage ripple. 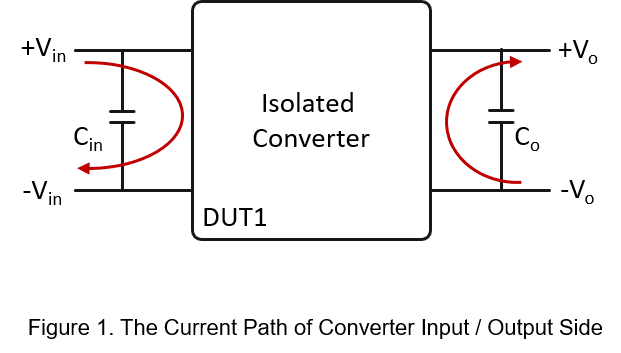 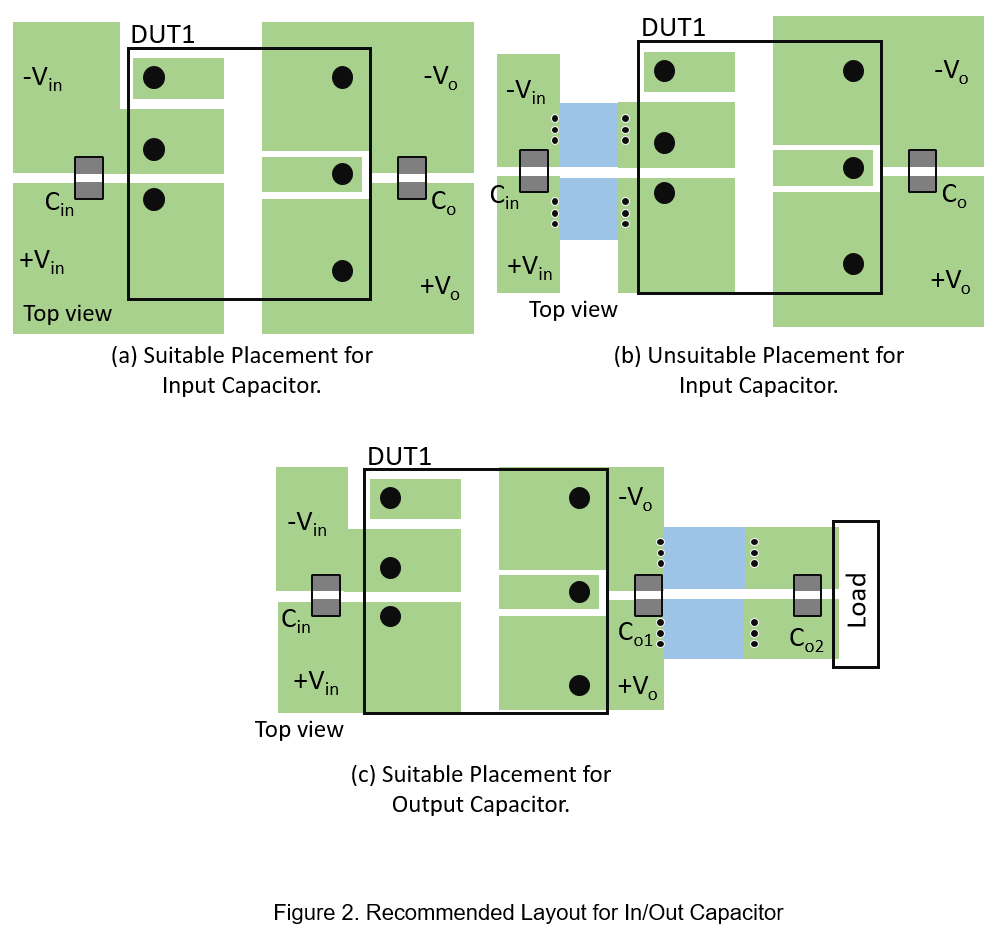 2. PCB Layout and the Trace

Proper copper area helps the converter to dissipate heat through the pins. However, in practical applications, it is hard to achieve sufficient heat dissipation PCB area on single layer. So, the common method is through multilayer board to increase the PCB area, and use through-hole to connected.

Through-holes can help conduct the heat to other PCB layers, Figure 3(a) is the suitable layout. For insufficient PCB layout or trace, as shown in Figure 3(b). The converter can not dissipation the heat to PCB, so the converter will operated at high temperature states, which might cause damage for the converter. 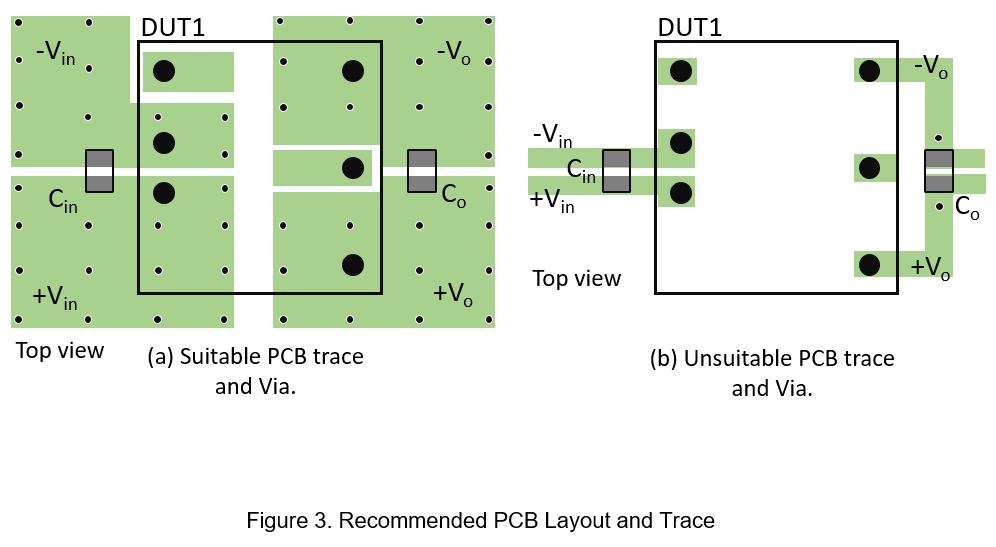 In addition, it can used below formula to calculate the PCB layout trace.

I: Maximum current-carrying capacity (A)

3. The Placement for EMI Parts

The datasheet of converter will show the external circuit for EMI. PI-filter, Common-Mode Choke and Safety capacitor are the most common method for solving EMI. It is very important to choose the right parts. In addition, the placement and layout often affect the EMI results. The following will show some layout methods for EMI external circuit.

The PI filter is one of the common external circuit for EMI, which is composed of inductors and capacitors. The recommended layout is shown in Figure 5(a). In order to avoid unnecessary noise interference. As Figure 5(b) shows, do not wiring directly under the inductor.

Safety capacitor means it will not cause electric shock after the capacitor failure. And it includes X and Y capacitor. The X capacitor is connected across the two lines of the power line. The X capacitor can suppress differential mode interference and often used in AC-to-DC converter applications.

Figure 9(a) shows the recommended layout of Y capacitors. It needed to confirm the isolation voltage of the capacitor is higher than the actual application. Or, it will damage the Y capacitors. So, if the isolation voltage requirement is high, the primary and secondary trace should not be too close, such as Figure 9(b). And, if the converter case is metal, the Y capacitor should not be too close to the converter to avoid insufficient isolation distance. 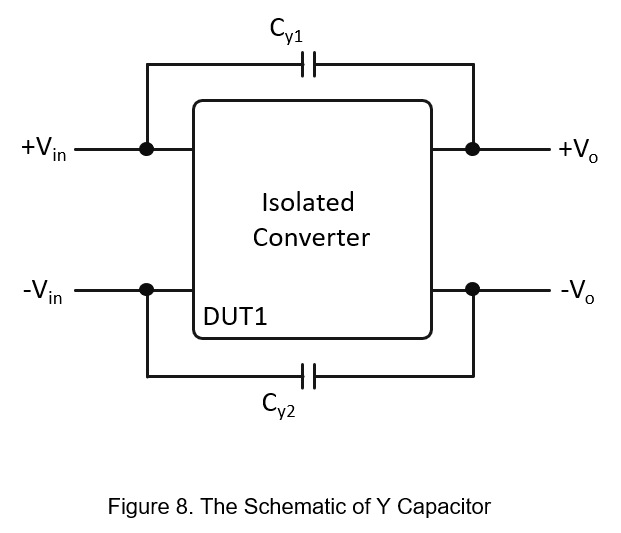 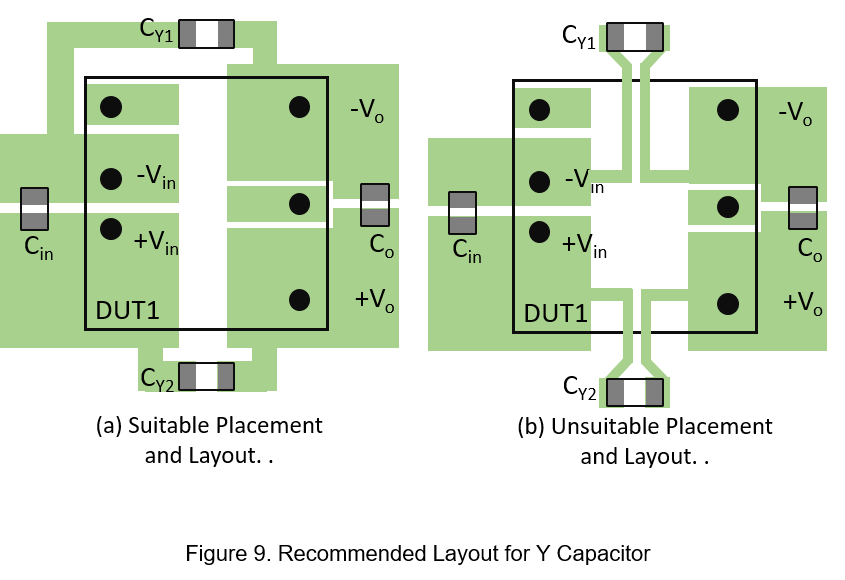 So, the solution for EMI is slightly different from general ones. 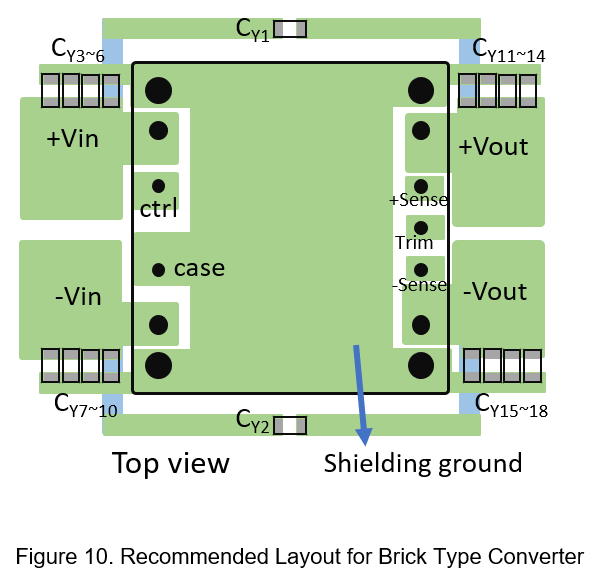 Appropriate layout can help to improve the performance of the converter. But each design has its own requirements. So, it is hard to standardized the layout rule. This paper introduces methods that have been found useful. And provide some suitable and unsuitable layout methods, and user can adjust their own design from it.